My primary computer since I started at Cal Poly has been a Lenovo ThinkPad X220, an awesome 12.5” ultraportable laptop.

I recently had to replace several components, and learned a lot in the process. While that knowledge isn’t very useful to me anymore (hopefully!), perhaps it will be useful to someone else.

It all started in December, when the screen started flickering and showing a stretched image. Adjusting the hinge usually resolved the issue. (It would later develop new and interesting failure modes, and I would develop increasingly complex workarounds.) 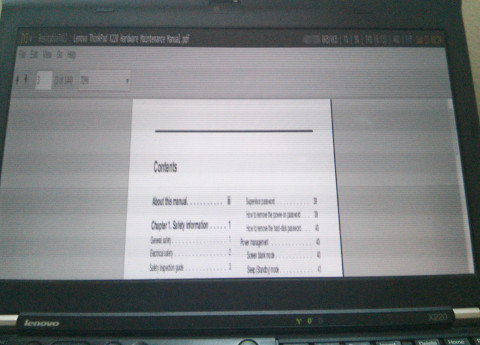 “No problem,” I thought. “I’ll just get a new LCD cable and follow the instructions in Lenovo’s Hardware Maintenance Manual to replace it.”

Three months later, the laptop is finally back to full functionality.

A full play-by-play of the process would probably just be confusing, so I’ve tried to better organize the lessons I learned along the way.

The cable that connects the LCD panel to the system board (FRU 04W1679) is, understandably, one of the harder parts to replace, since it requires taking apart both halves of the laptop as well as the hinge. But the manual has good instructions for every step.

The connector between the cable and the LCD panel is very slim and a bit tricky to get right and even to apply pressure on without worrying about the LCD. Since it’s also hard to take a good picture of, I’ll just note that the two sides of the cable need to fit under the corresponding flanges on the panel, after which it should make a snug connection even without applying the tape.

On my first attempt, I bent the end of the cable (and temporarily also the port on the LCD) out of shape, and had to get a second replacement. When that failed to improve the condition of the screen, it was clear that the panel itself needed to be replaced. (But the original cable was definitely showing wear, so I’m glad to have replaced it.)

The LCD panel itself is easy enough to access by removing a total of 6 screws.

Identifying a replacement panel of the IPS flavor (which I knew I wanted) turned out to be somewhat difficult. Lenovo’s FRU numbers don’t seem sufficient here. After receiving (and returning) a lower-quality TN panel, and some discussion on reddit, I found it effective to just search for the keyword “IPS” to find IPS panels for sale. One of those just arrived in my mailbox, directly from Hong Kong.

But that’s not quite the end of the story. While disassembling the laptop the first time, I tried to clean the keyboard in tap water, apparently didn’t let it dry out enough, and found I couldn’t even boot anymore (the power button is part of the keyboard).

So, it was time to get a replacement keyboard too (FRU 45N2211, 45N2306, and others, for the U.S. layout). I had some bad luck with used keyboards that didn’t quite work right, and ultimately got a brand-new one that’s doing very well.

Finally, three months, two attempts to replace each of three parts, and $120 or so later, the X220 is back in better shape than it was before the problems started.