I’m spending a semester studying at the School of Information and Communication Technology at KTH Royal Institute of Technology in Stockholm, Sweden. I arrived early last week and have been adjusting to the timezone, weather, culture and academics since; here are some initial thoughts.

A bit of snow and below-freezing temperatures arrived in town shortly before I did. Coming from California’s current warm drought, this was a bit of a shock to experience, but so far I’m staying warm enough.

It’s fascinating to hear (starting in the airport) the sounds of foreign languages. Here, I can get by speaking only English, though as signage is mostly Swedish-only, supermarket labeling and laundry instructions have presented small puzzles.

An efficient—in particular, extensive and frequent—public transit system like Stockholm’s is of course wonderful. When trains and buses run every 5-10 minutes, I can almost stop worrying about catching a specific one, and instead just allow a sufficient time buffer to reach my destination.

Most courses at KTH operate on a half-semester study period schedule: about 8 weeks plus exams, even faster-paced than Cal Poly’s quarter system! 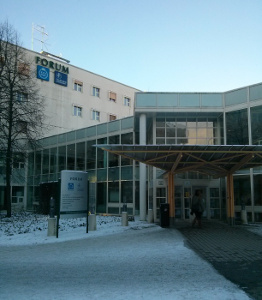 This period, I’m taking two technical classes, which had their first few meetings this week. One has a sizeable lecture of around 50 students, while the other has only 8 in total. I chose relatively project-heavy classes, and we’re already delving into the first assignments.

These courses are held at the KTH campus in Kista, a quieter suburb about 40 minutes by metro from my apartment.

The Master’s programs at KTH are conducted in English, and have very strong international student enrollment. Indeed, I’ve met very few native Swedish students so far (though I’m sure it doesn’t help that among themselves they converse in Swedish).

I’m happy to find the classroom environment friendly and relaxed, hardly unlike what I’m used to.

The KTH student union has organized a lot of fun introductory activities that have helped get me out of my apartment this week, including

Coming up next week: the start of my introductory Swedish class, and a trip to the FOSDEM conference in Brussels!